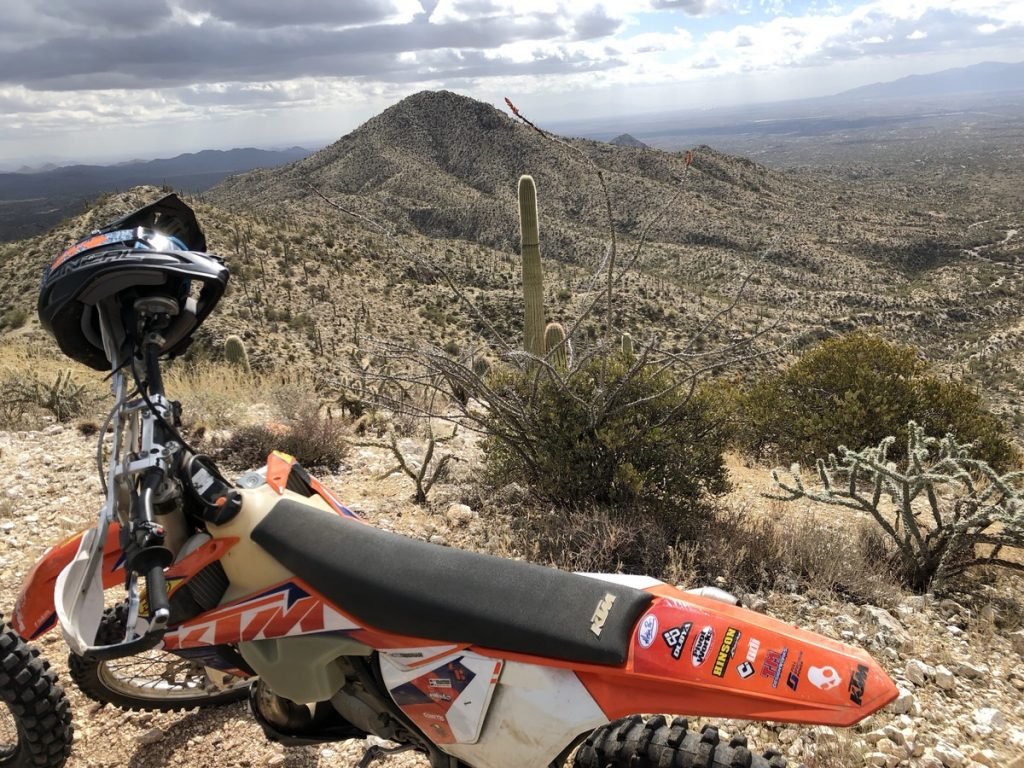 “Booked two days on Dougs bikes while staying on a dude ranch called Rancho Casitas just a few miles out of town. Doug winters there and met us with beers, BBQ chicken and veggies. Called it an early night and crashed for the evening. Our apartment at the Ranch was cozy and had a killer retro vibe because of the well kept mid-century decor and fixtures. Nice sized pool and crucial hot tub for after-ride soaks. The owner, Linda, was an absolute sweetheart and we felt right at home. Woke up the next morning to AZ sunshine followed by some good coffee and breakfast at a local cafe. It was a windy day and my buddy and I had some cocktails to sweat out, which had us a little off our game during day 1, but the riding was awesome. I chose to keep it similar and ride Doug’s KTM 300XC, my buddy did the same and rode a TX300 like he has at home.

The terrain was similar to places I have ridden here in Northern Nevada, but only because there are washes and it is in the desert, other than that they’re worlds apart. The riding down there was astounding, fast washes connected to twisty and technical singletrack covering hundreds of miles over rolling mountains. Wickenburg had received moisture the week prior and the soil was awesome, no dust and traction everywhere. Riding through dense cacti throws in a whole new psychological element because all the vegetation in Arizona wants to hurt you. I took a teddy bear to the hand and Doug spent a few minutes with pliers picking the pricklys out of my knuckles. We finished day 1 with some fun and challenging hill climbs. That night we hit the hot tub back at the casita followed by beers and sleep.

Day 2 the weather was even better and no wind. I decided to change it up and rode Doug’s FX350 out of curiosity and my buddy stayed on the TX300. Besides the occasional jaunt for a mile or 2 on a road or wide wash, the riding was twisty, technical, flowy in spots, slow in spots and down right fun all around. Rode to the top of Picacho Peak (I Think) and took in the views while eating lunch. Arizona is its own kind of beautiful and taking it in on the back of a dirt bike is literally my slice of heaven. We put down about 50 miles on day 2 and we loved every damn minute of it. Doug is a super fun guy to talk to and ride with. Extremely laid back, but incredibly knowledgable and humble. If I didn’t already have a good dad, I would beg for Doug to adopt me! hahahahahah I literally almost teared up when I had to say goodbye the night before we left. Not to mention the guy can cook like a boss, brought over a pork tenderloin and veggies that night, cooked to perfection. Already made plans to drive down next winter with the toy hauler and spend a week riding with him.

If you’re a beginner and worried that riding with Doug might be too difficult, don’t be! He can literally get a gauge for your skill and experience then taylor fit the terrain for you. If your contemplating riding somewhere youve never seen or been, stop wasting time and book a trip with him. He’s in AZ until March 15th then back in the NW after that.

Flew out of Phoenix at 0645 yesterday and back to work in the high teens today. Why did I come home again?

Thanks again Doug for an awesome trip and some excellent memories.” 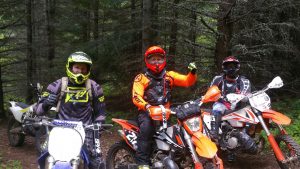 Kyle: “This past Monday and Tuesday 6/12 and 13/2017 a buddy and I booked a guided trip with Doug McDonald from Oregonmotorcyclerental.com

I’ll admit I was a little hesitant to hire a guide in the 1st place, but being as I had been on two (long and expensive) trips in the past year where I didn’t end up finding the type of terrain I came for until the end of the trip. I figured this would mitigate that process and make it possible for me not to have to take any extra days off work to get in some technical, challenging and fun riding.

We left Sunday and took a 9 hour journey to Hood River, OR. We stopped in Bend, OR for lunch and a beer at Worth Brewing before grabbing some 101 non-ethanol for the trip and hitting the road. Here’s my setup and my bike loaded before my buddy met me at my place:

We met Doug on Hwy 35 at the edge of town on Monday morning. Doug was super laid back and personable that morning and brought us sustenance for lunch. We followed him into the mountains SE of Hood River and unloaded. We rode 5 hours on Monday and 5 hours on Tuesday.

This was some of the best riding Terrain I have ever been on with amazing soil, great views, technical and tight singletrack and challenging hill climbs. Doug was an amazing guide and kept the trip relaxed and flowing smoothly and let us dictate how much we wanted to be challenged by making the terrain progressively more technical throughout the day. So much fun I was laughing, cheering and smiling all day. That day my buddy had told Doug he wanted to learn how to pivot turn. Doug took a half hour showing him the basics and techniques to work on to master it. Pictures from day 1:

Day two Doug had another guided rider scheduled to ride with us from Eastern Oregon. Doug explained that this rider may not be up to the skill level of my friend and I and so the 1st hour or so he was gonna lead us to some more open and flowing trails compared to the day prior. Luckily the guy surprised us all and quickly proved that he could hang. So, Doug accommodated us with some rooted, rutty and tight vertical sections until we were tired. Then we rode to a viewing area and the top of the mountain and I took these photos of the apple orchards and the bottom of Mt. Hood.

We rode until just after 2 pm loaded up and drove the 9 hours back home with big smiles on our faces before returning to work on Wednesday morning. More pictures from day 2.

I am no novice to navigation and with a GPS I could have possibly fumbled through the woods with a 50/50 chance of being lost most of the day. Doug’s services were worth every penny in my opinion. The trails are not mapped and more and more are made every year by the locals. Hood River is friendly and the bar tenders are generous. Doug was helpful, personable, entertaining and professional the whole trip. I am currently planning a trip with him this fall to go to Tillamook State forest.

In closing, if you’ve seen his ad in Dirt Bike (like I did) or you just wanna get away from home and ride somewhere new then book a day or two with Doug in Hood River and Trudy me you will not be sorry.” – Kyle